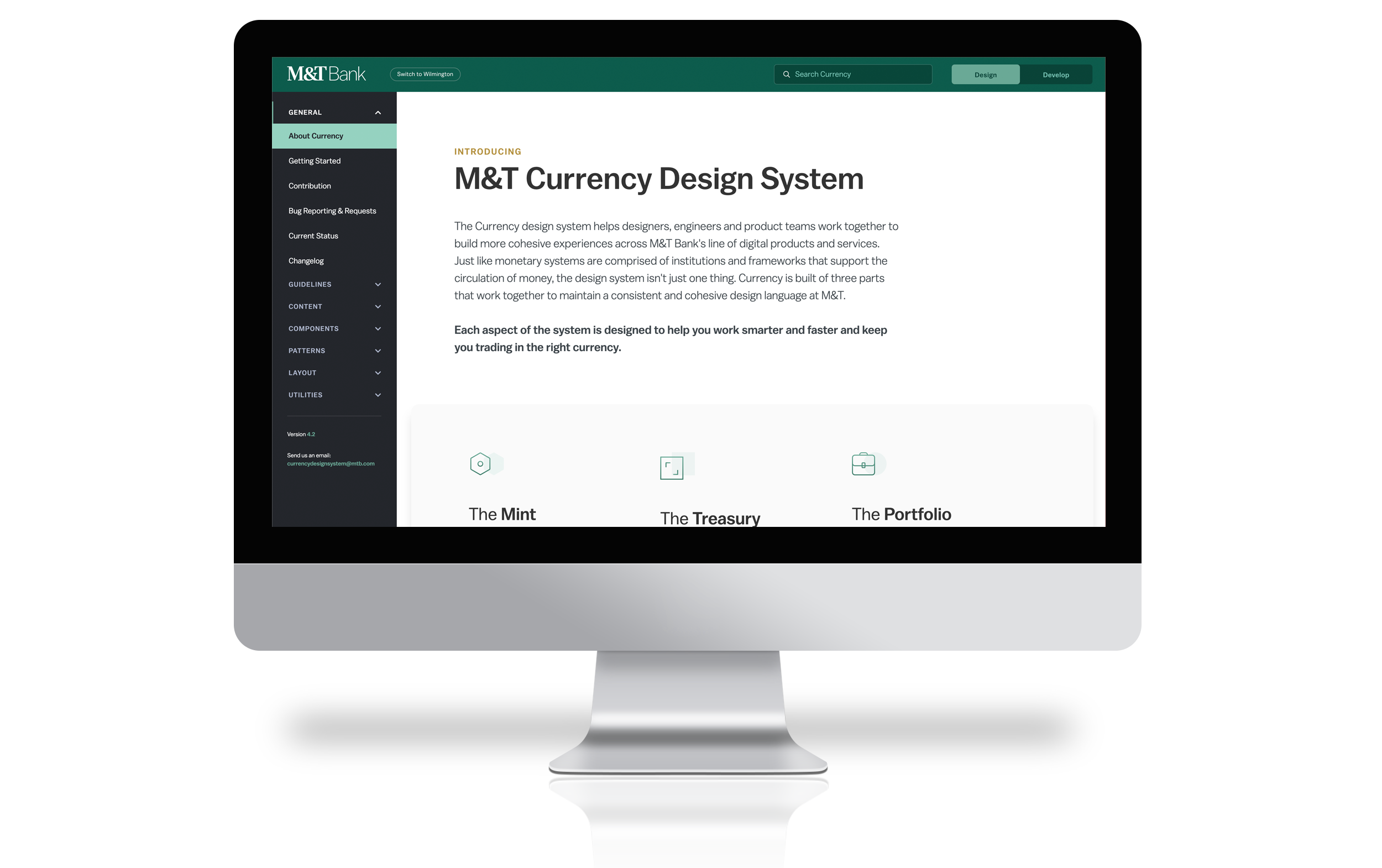 Currency is the official design system of M&T Bank, used by numerous design and engineering teams. It is comprised of three parts, the Figma component library, the codebase, and the documentation standalone site.

I joined the bank's Customer Experience Design team in 2018 as the second UX Engineer on the Design System team. For the last 3.5 years, my focus at M&T has been on building Currency from the ground up and continuing to grow it as a standalone product.

The need for a design system is widely known now, almost to the point of becoming a new buzzword in the industry, but it was only a few years ago that we had to really prove to stakeholders and executives the actual value of having one. Design systems simply provide consistency, efficiency, and uniformity across a brand. Being a UX Engineer, this concept deeply intrigued me as I was always the person bridging the gap between engineering and design, and a design system in essence is a personification of my role at most companies.

Design systems remove, or at the very least, migitate the need for engineers to go through a design review process in which each detail and pixel is examined to see if it matches the design that was originally delivered. In fact, this extends even to design teams themselves—ensuring that any component or element used by one designer is identical to that used by another.

This of course is not new nor unique to what is branded as a "design system". It existed in Sketch as Symbols for quite some time, and even moreso in front-end engineering as components. A design system takes this principle of consistency and reusability and amplifies it across every aspect of the product as an umbrella of uniformity. Usage guidelines, content design, usability, UI language, tokens, stylesheets, all live and exist together under one living, breathing product that is a design system.

When I first joined, the design system simply did not exist, as I was part of the team responsible for creating it from scratch. At this time, design systems were a relatively new topic just starting to gain popularity. There were only a handful of public design systems that we were able to learn and study from, such as Shopify's Polaris.

My team and I were sent to Clarity in NYC, a design systems convention dedicated to guiding and teaching design teams about design systems. We learned about various useful topics, such as how to sell teams on adapting a design system, component naming philosophy, and engineering conventions.

Because our team was small, we focused on what was important, building what was an MVP of a design system. A Sketch component library (we did not switch to Figma until later), a CSS library, and a documentation site to showcase and provide guidance on how to use our components.

To provide value to the company, the components had to not only follow every part of the bank's design guidelines, but had to also pass vigorous usability testing. On top of that, the front-end components had to be cross-browser compatible and degrade gracefully on other versions.

Convincing teams to adapt a design system was the biggest challenge we faced while growing. It didn't matter how great our components were, or how clean our code was. Without users, a design system serves no purpose as a product. Our design teams were enthusiastic about using it, understandably so, as it provided them the most value and saved them the most time. From a designer's perspective, there were only pros with very little cons, since it was easy to simply divert away from it.

Getting engineering teams to use our product was another story. Developers tend to be more careful with what external dependencies they use, have their own conventions and processes in place, and overriding code is much more of a hassle than overriding design files.

Stakeholders were also unsure of the value of having a custom design system over something like Google Material that not only works straight out of the box but emcompasses more features.

On top of acquiring users, we also had the challenge of convincing higher ups to allow our team to grow, which was incredibly difficult if there were no real teams actively using it. It was a catch 22—how could we get the product to be in a state where it could be adapted by engineering teams if we didn't have the manpower?

3 years later, our design system is more mature than it was before, but certainly not perfect. Design systems are always growing, so there's no true final state, but there is still much work to do. Even though we've successfully proved our worth, scaling was now our biggest challenge.

Bug fixes take up the majority of our time and priority, as we now have numerous teams using it in their workflow. The more use-cases there are, the more bugs to be discovered.

There are still more components to build, and we have not found a way to efficiently work out external contribution from other teams. The process of adding a new component to the design system is extensive, and the team isn't growing fast enough to compensate for the new demand.

As per its name (by yours truly), Currency is intended to be used as bartering system for exchanging [ideas] between designers and developers.

Because it serves such a wide range of teams across the company, Currency itself cannot be tied to a single framework or library, but at the same time, it must be compatible with every engineering stack. To address this, we offer two consumable libraries—a large compiled CSS stylesheet for teams that do not need anything more than pre-existing styles, or a more robust SCSS library. We serve this as an npm package on the company's private registry, allowing any engineering team to quickly make use of it.

We understood that the commitment to adapting a design system was huge, so the very least we could do was integrate into product teams without being too invasive. Currency was designed to be a utility belt that allowed itself to be called upon without overriding any existing styles. This was made possible using the BEM naming convention. Additionally, we made it easy to override Currency's styles locally. This was one of our main selling points as to why teams should Currency over Material Design.

Coined by Brad Frost, atomic design is a design methodology that groups design elements together based on the atomic theory. Atoms are the smallest building blocks in the natural world, so design elements that cannot be broken down any further are considered atoms. A group of atoms create a molecule, which becomes organisms, and so on. This level of dependency between components allows for seamless scalability and consistency.

Tokenizing design artifacts allows for cross-platform synchronization, and goes hand-in-hand with the atomic design methodology. Tokens are essentially subatomic particles (such as an electron), used to form atoms. These tokens are aligned between design assets and code to ensure uniformity. This also allows for more structured code writing.

Components exist for both brands, keeping structural similarities and sharing the same codebase, with different tokens being fed to them. However, some components are brand-exclusive, and while each component exists in the system, they are not used unless necessary.

The smallest possible design element are tokens—or essentially, variables. Currency keeps a uniform library of tokens that feeds to both the Figma component library and the SCSS codebase.

The most generic example of tokens are colors, spacing, and typography, but they extend beyond the initial level and can nest upon one another. For example, while $colorPrimary may be a token, $buttonBackgroundColor is also a token that calls on $colorPrimary, although the latter is an atomic token, as opposed to a base token.

Atoms are the most basic design elements of the system.

The basis of an atom is that it cannot exist as a smaller standalone element. Labels, inputs, error messages, radio buttons, buttons, are all examples of atomic components.

Each component has variants of itself to cater to the different usecases. Additionally, interactive components also have predetermined states.

Patterns are a collection of components placed together to form a standalone functional component. They can sometimes, although rarely, have elements that do not exist as standalone atomic components, as they have no real purpose outside of the pattern. 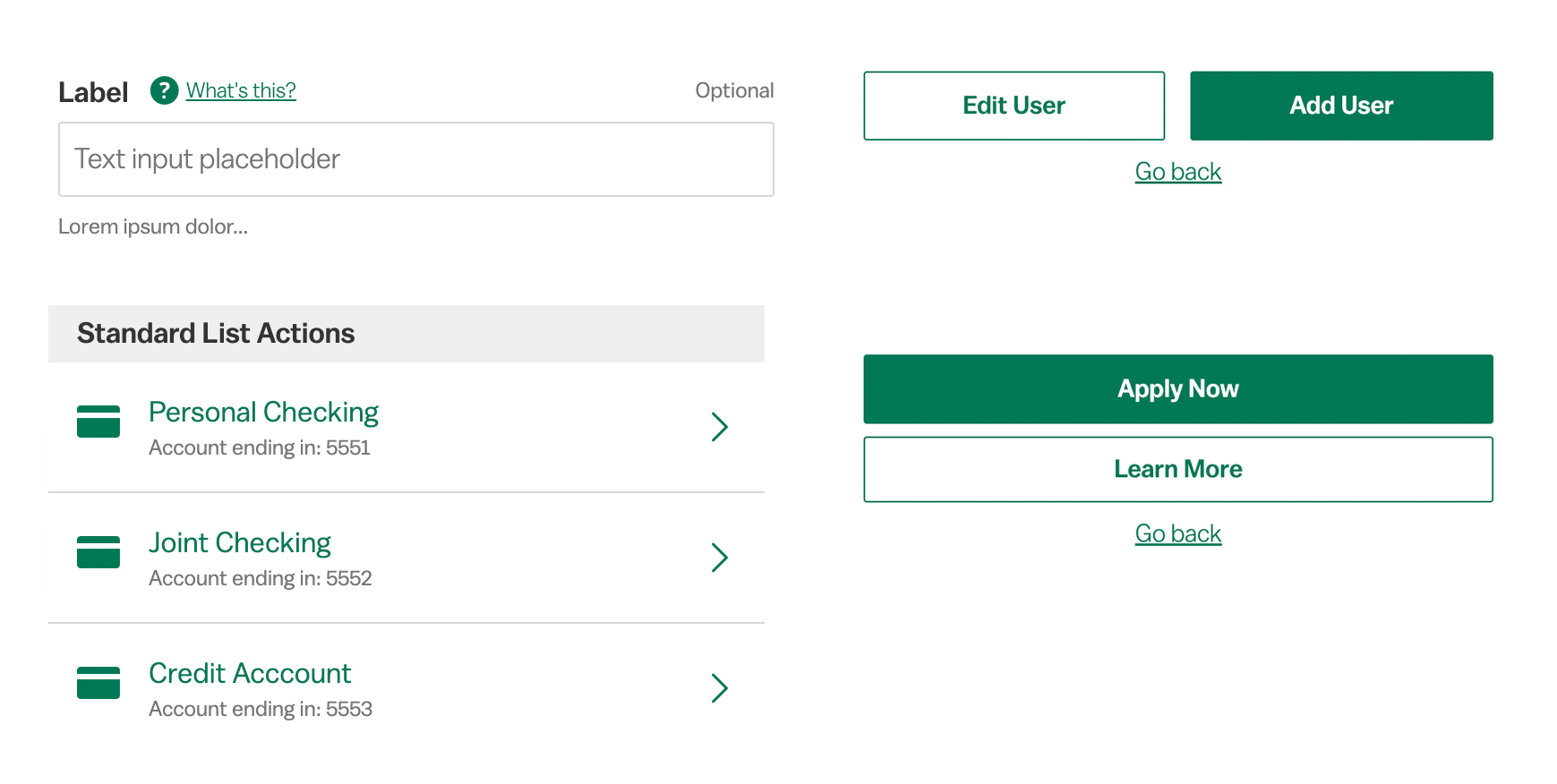 The third component of Currency is the documentation site, which not only serves as guidelines and an information portal, but showcases the live components directly from the design system codebase itself. 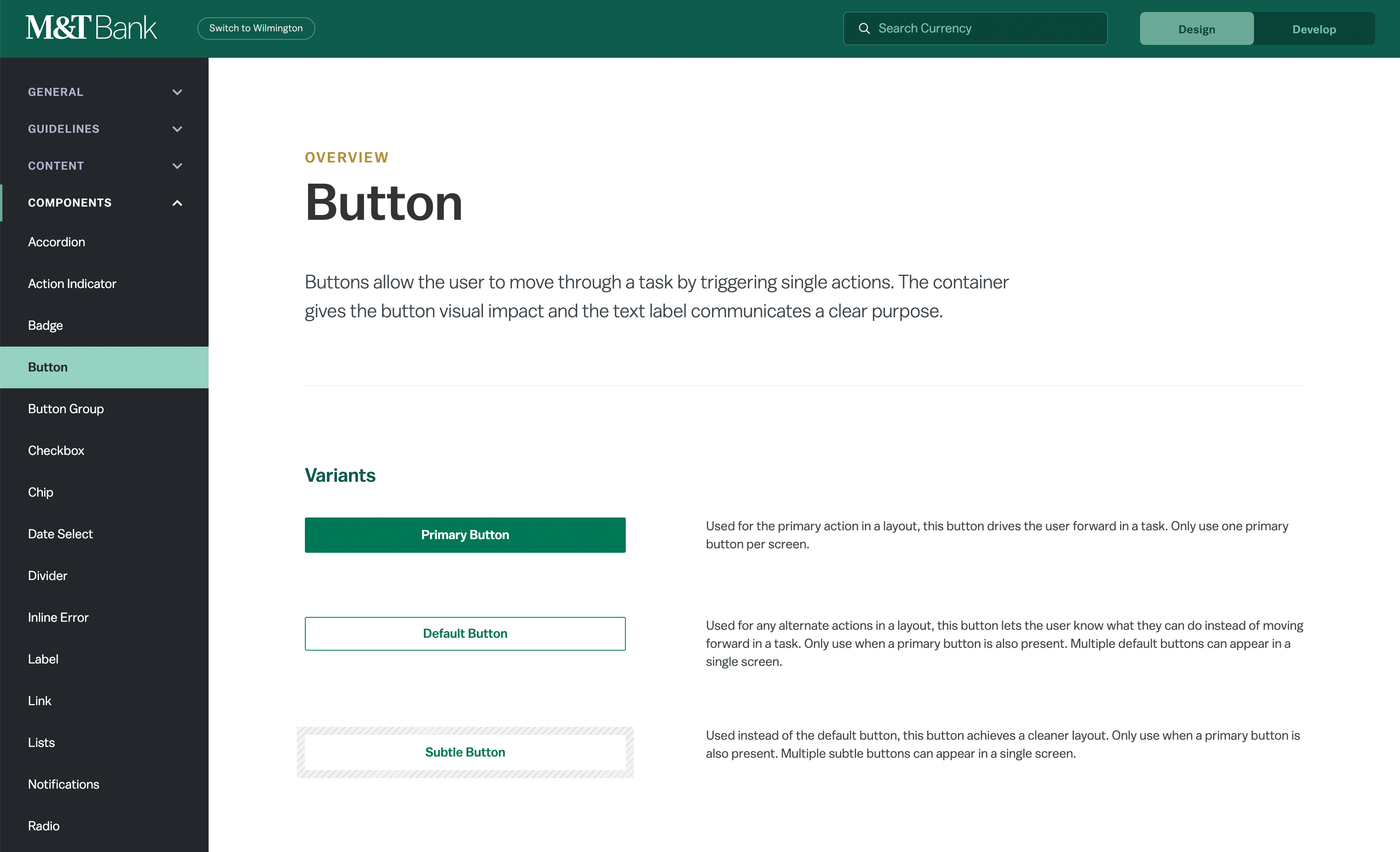 Each component is alive and interactive, allowing users to inspect them in real-time. In a previous iteration of the site, users were able to change the backgrounds in which the components were layered over, as well as viewing the outlines of every div inside of the component. 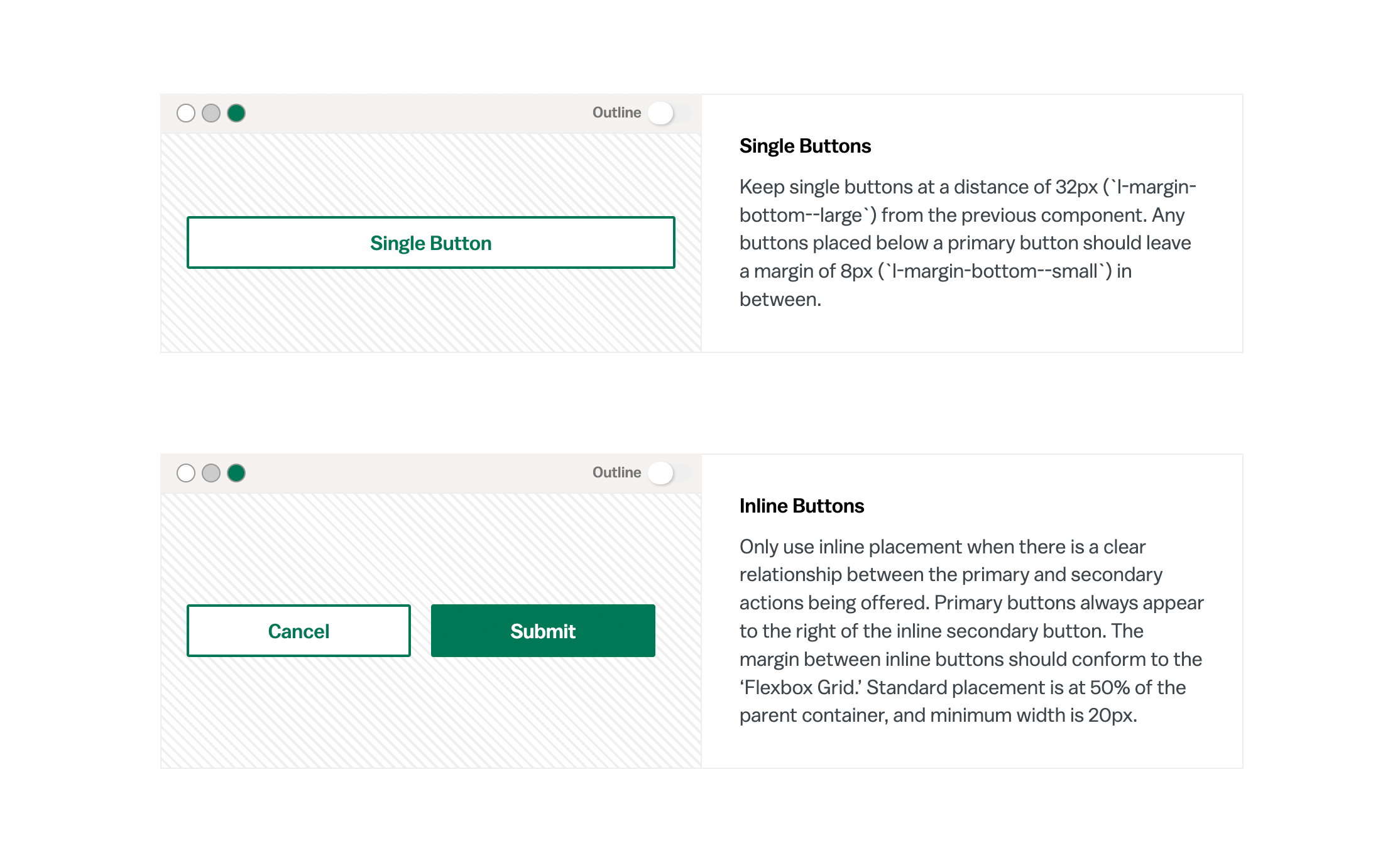 Currency serves both designers and developers, and each page has two states—design and develop, controlled by a toggle on the top navigation of every page. As a majority of developers prefer a darker background, the developer page changes into a 'dark mode' to denote the difference between the two modes. 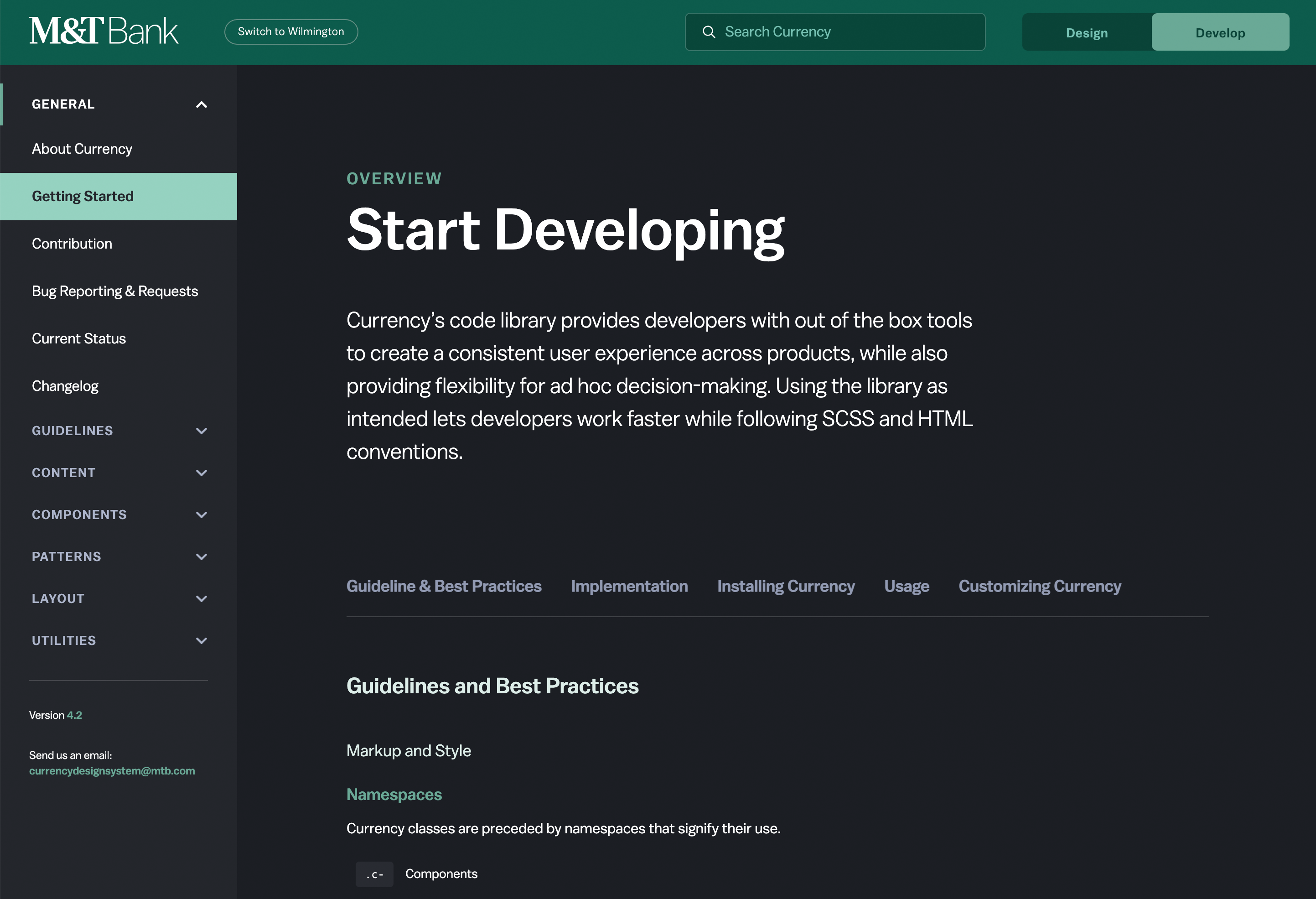 The content of the entire page also changes on Developer mode, showcasing HTML markup with syntax highlighting and a copy to clipboard button to make it easier for developers to use the components. 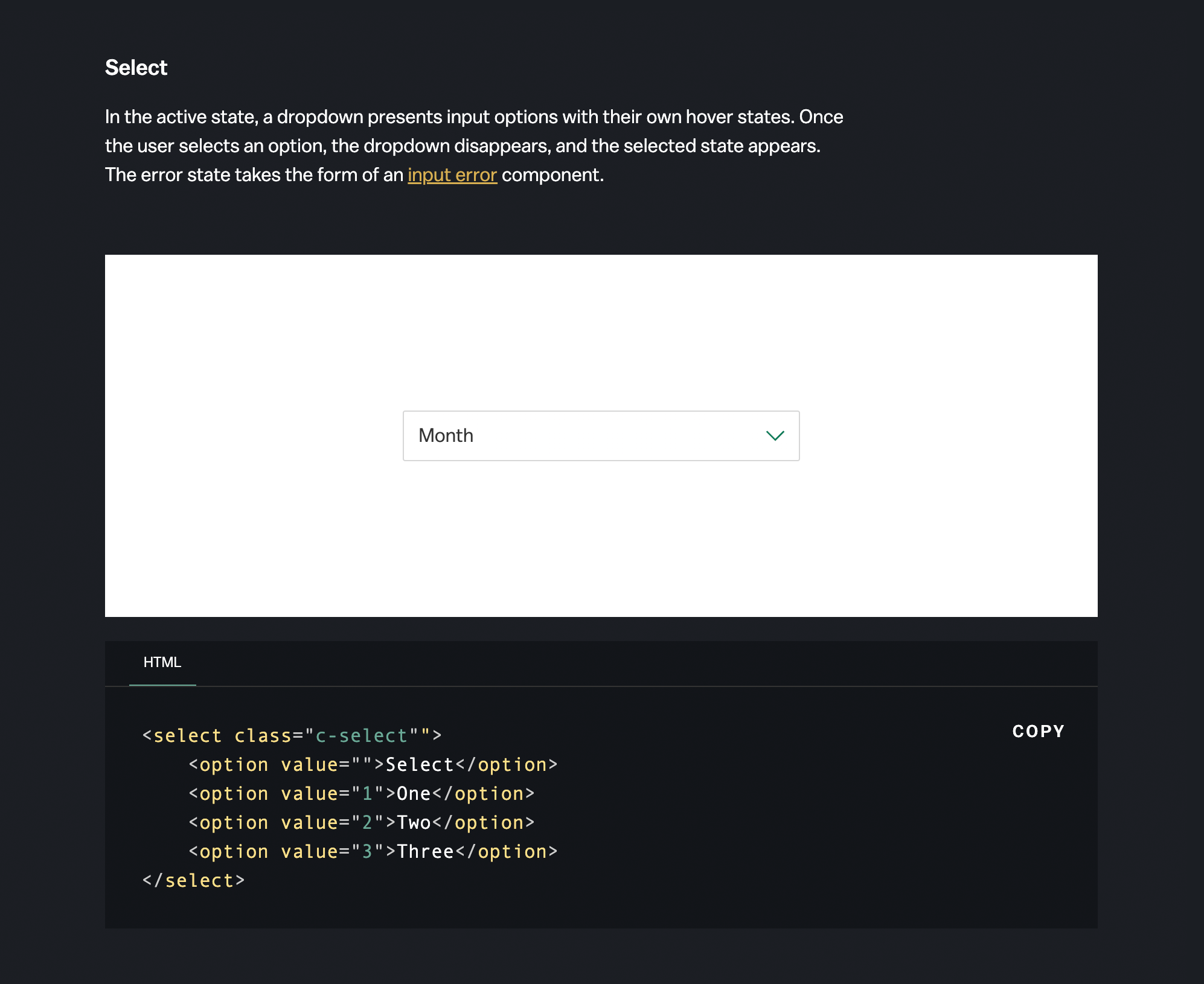 Aside from the design to developer toggle, the site also caters to Wilmington Trust—completely switching the stylesheets into the secondary brand of Currency.

The content of each page is written specifically for each brand, and usage guidelines may differ between brands. 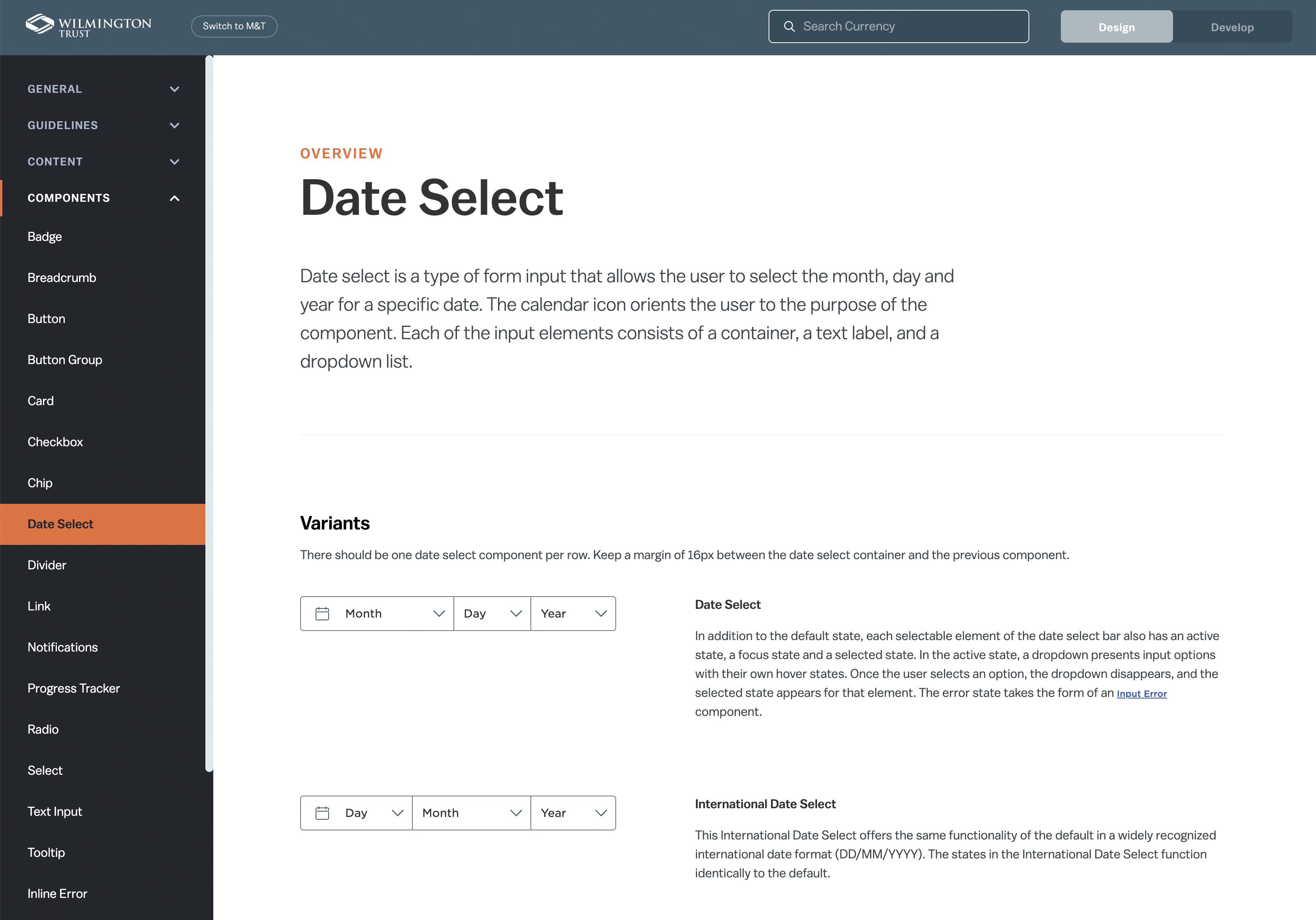 Aside from components, Currency also provides various utility classes for developers to use. The documentation sites out each class, its values, and its functionality. 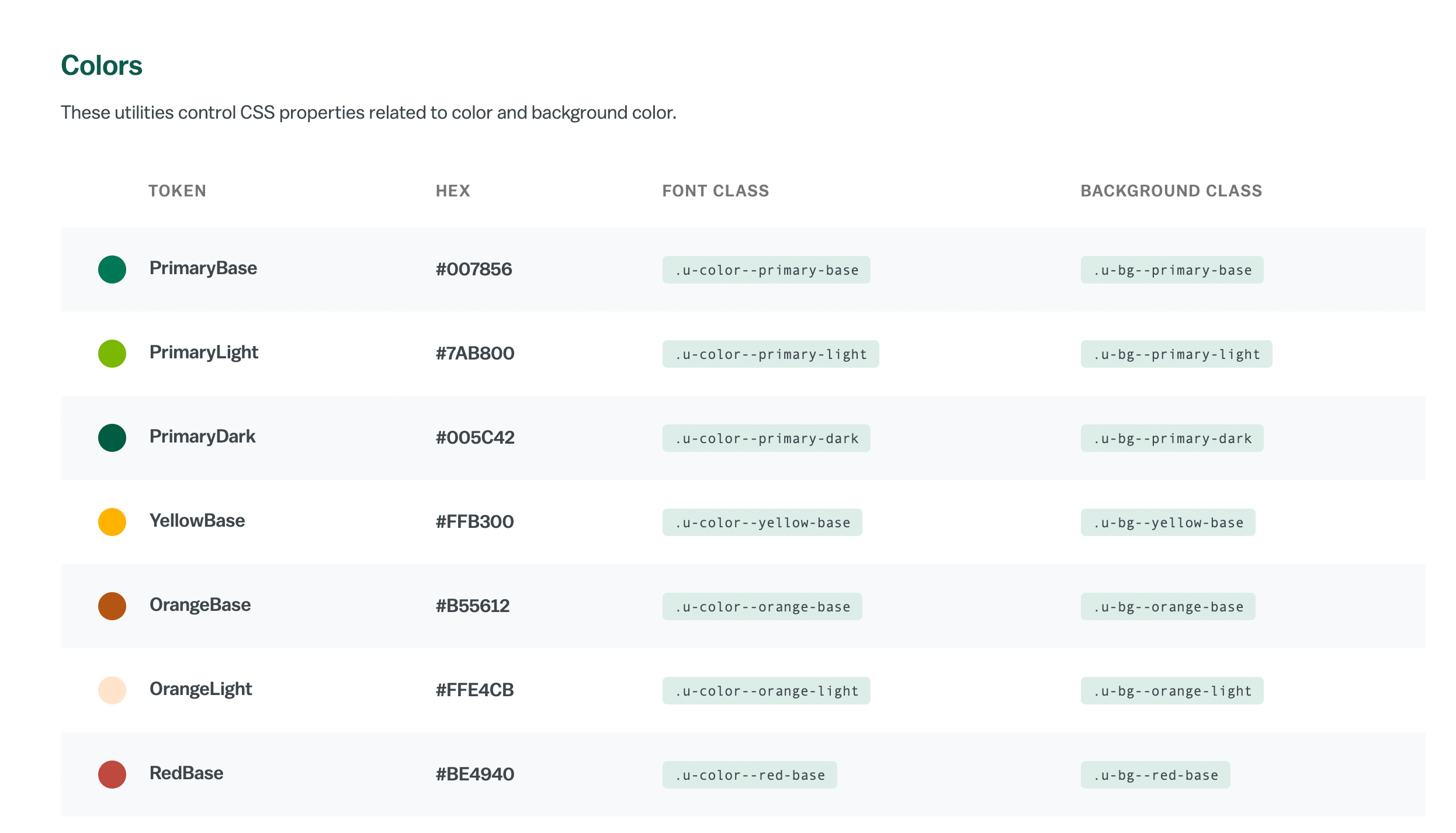